‘THE FUTURE GROWS OUT OF THE PAST’

May 22nd it will be 225 years ago that the Clapham Saints decided to battle slavery. This group of twelve, mainly young guys in their twenties (also joined by some influential women) were up against enormous forces. “They are an inspiration for us, as we look for new ways to battle poverty in our time,” says John Hayes, who lives with team members of InnerCHANGE among the vulnerable of East End, an area in London known for its poverty.

Because of personal interest and as former history student at Princeton, John gives regularly a ‘spiritual history tour’ through the heart of London. “The abolition movement started in the shadow of the powers of their time; it’s a modern Exodus story. The Jews lived also in the shadows of the pyramids,” explains John while we stand at Bank square where impressive buildings housed up to recently the world’s most powerful banking, financial and economical institutions.

“The forces they were up against were enormous,” continues John. “It wasn’t only the economic powers they battled, but at the time slavery was considered part of God’s order. Three fourth of the world were in some way involved in slavery. They had to influence the public opinion to care for black people, very different than themselves and who were 8 thousand miles away. Besides Brittain was battling Napoleon, a battle around life and death for the empire. They had other things on their minds.”

Abolishing slavery was the main battle, but it was part of a broader reform movement. East End was notoir for it’s poverty. The level of desperation was so high that one out of three women prostituted themselves to survive. In 1887 Jack the Ripper killed five women, in that same year 300 women died of deceases. “The government was afraid of this neighborhood, they feared a revolution could spark in this neighborhood like in France.”

Moving into the neighborhood

John (57) knows about living in dangerous neighborhoods. He decided in his twenties to live among the poor in his hometown in California. Others followed and INNERchange has now teams in cities in five continents. John recently moved with his family to London where he rents a flat in a housing estate. He is interested in the rich history of West End, with statutes and plagues on houses, but even more so in the history of his own poor neighborhood:  “I’m talking to my seventy and eighty year old friends in East End. Some of them are bitter and tell me that they want to forget. They assure me that there are no stories, but I’m convinced that there are. For example, hardly anybody knows that John Newton was born in Wapping, East End.” 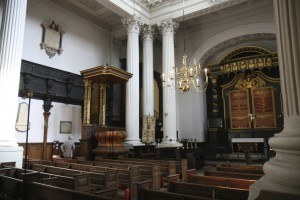 We walk into John Newton’s church, just around the corner from the printershop where the abolition movement started. Newton was closely involved as William Wilberforce’ pastor. He was a former slave captain, who wrote ‘Amazing grace’. In this church on May 22nd that day will be remembered, but John Hayes hopes it will mark a new beginning: “these guys started the first advocacy movement, which is still studied. They started small. What if we – very small – can give an example of empowerment from the bottom up in East End, carried by the people of the neighborhood. And where the church will creatively lead the way again – as she has done for over 1600 years.”

John believes that ‘poverty is made political, but needs to become personal again’. What does that exactly mean and involve? More in the next blog…