“We call our people City Changers,” said Alan Platt. “They don’t come to church for a program, they are the program.” During a tasteful dinner in a relaxed atmosphere, this South African pastor gave an inspiring talk to church leaders in Rotterdam.

GIDSnetwerk teamed up with other organizations to offer an informal dinner for church leaders. They did so with the aim to connect people and to inspire and encourage to make an impact in the city. So on a sunny evening on the first of April over seventy pastors, elders and diaconal workers from a wide range of denominations gathered in the Happietaria – a pop-up restaurant downtown Rotterdam. Some met friends or renewed contacts, others attended for the first time a GIDS event, but everyone met someone new, as seats were changed in between courses. 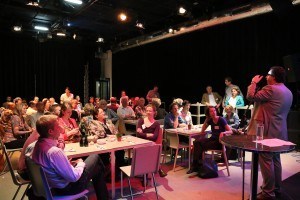 “In Africa we have the saying ‘it takes a village to raise a child’, but who takes responsibility to raise the village?” Alan questioned in his short speech. “We aim to enter into spaces to effect dimensions of society by bringing Gods perspective for this world into the scene.” Alan pioneered and leads Doxa Deo, a church of 20 thousand with branches in London (Great Brittan) and Stuttgart (Germany). www.doxadeo.co.za

Their church did some re-thinking in areas of theology, philosophy and strategy. That is needed to effectively enter into areas of society, according to the South African. By referring to the biblical story of the feeding of the five thousand, he shared some keys they discovered.

From concern to compassion

“We see in this story that the disciples were concerned about the people who had become hungry,” Alan continued. “They suggested to Jesus to send them away. As churches, we often respond in this way to needs. We are very concerned, but concern doesn’t necessarily lead to action. We prefer the problem to simply disappear, but we are challenged to get involved. Jesus was compassionate; compassion gets involved and leads to action.”

Empowering instead of blessing

Also, according to Alan, we need to develop a missional environment, instead of viewing the church as a pastoral environment:  “We encourage for example our teachers to see themselves, when entering a classroom, representing the Church and being Kingdom agents – by doing so, they feel more empowered and get a sense of Gods collective agenda. So instead of ‘blessing’ people when they come to church, empower and quip them.”

Small steps in the right direction

“When the disciples would have been wise, they started with breaking small pieces off the bread,” laughs Alan. “I would have done so!” The disciples didn’t know at that point that God would miraculously provide. Instead of waiting for all the resources to be there, before making a move, we are encouraged to step out and trust for Gods grace and provision. “Start taking small steps in the right direction,” Alan encourages.

Alan shares the story how they got involved with local education. By ‘taking small steps in the right direction.’ They started with inviting the Heads of the local schools for gatherings, where these principals were encouraged, asked what their needs were and how they could be served. Some were reluctant in the beginning, but gradually relationships and trust established. They found out that the Heads of schools would be helped by management assistance, and so they connected them up with Christian CEO’s. One thing led to another, now forty-five Christian youth leaders are involved with the schools in their area.

Following his short speech, GIDSnetwerk’ chairman Setkin Sies, encouraged the participants to take the courage to be vulnerable and share a difficulty before praying for one another. A tender spirit was almost tangible as people shared and prayed at their tables. In closing the evening, Setkin prayed: “God, may you have enjoyed this evening.” As many with me, I certainly did.